Waiting in the airport/Thinking about Reacher.

They chopped up all the fruit for me put it inside a plastic container it it was perfect for my predicament, I wanted that little sugary hit that I enjoyed so much but also the nutrients I so obviously lack. We're all doing the same stuff. Charging our things and killing time. Murdering it with our tiny fingers against the glass until we can get on that metal bird and sling ourselves to another time space. Hopefully no-one has that dreaded "thing" everyone's talking about. Hasn't everybody already got a virus though. That what I was confused with.

In terms of thresholds I'm having ... with the character known as R who is supposed to be a ... that somewhat disconnected from current events... out of touch with his friends who are further left wing then him despite showing moments of sincere solidarity at times. Despite being physically bolshie; heavy footed, a touch that is heavier than others find sincere, a booming laugh, a wide stern gait. He is actually very sincere and has a sensitivity too him which people overlook. He has a lot of admiration for C and character the same for R but it is reciprocated in a less physical fashion. They are too some extent very different. R is ADHD. Character is more centered, yet they are sort of torn between so many things they are unable to fully pursue anything fully. I suppose you could say scatter-brained. They are both somewhere between the ages of 20-40. The social circles they mix in aren't predicated by age or anything for that matter. He is tall in statue. A large human for that matter. Abnormally large. Seven foot. Always eating. heavily clothed. Almost always wearing a hat. He dons a sort of German work jacket with lots of pockets and zips. The waistband of it is separating from the rest of the jacket. It was a sort of luminescent red color but is so worn its become a sort of navy, there is a sheen to it the way that well worn clothes with polyester in them have. I don't know if that why they have that sort of shine. I just always assumed that the cotton would wear away and that the polyester would shine through i'm not sure. 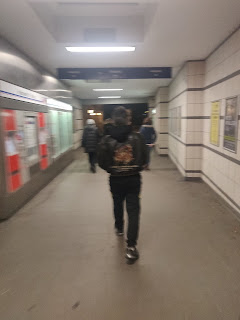 Noah Verbeeten
Applying pastiches, next on top of before, build incongruous portals